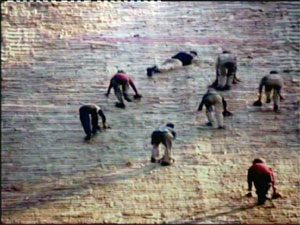 In The Slippery Mountain by the Provmyza group, the camera follows human figures seen from afar, trying to climb an enigmatic mountain whose top remains invisible. Time and again during the Sisyphean climb the figures lose their grip, sliding down the steep slope, tripping other climbers and taking them down with them. The climbing attempts and downhill sliding oscillate between dream and endless nightmare.
Formed in 1993.