Roee Rosen’s eight paintings of martyrs are part of a larger series of works, which was first presented at the Museum of Israeli Art, Ramat Gan, in 1994. These compositions are concerned with a number of Christian martyrs who chose to endure persecution, torture, and even death, rather than renouncing their faith. They were posthumously rewarded by canonization, and the memory of their torment has been preserved by the Catholic Church. 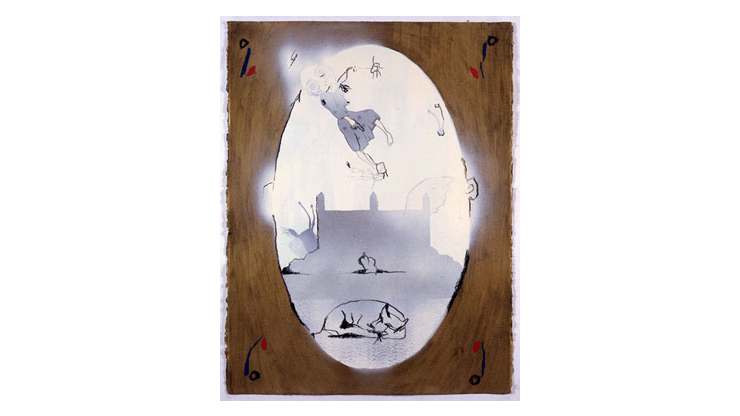 In an article titled Portrait of the Artist as a Blind Martyr, the scholar Roberto Maria Dainotto endowed this series of works with an “autobiographical” affinity. According to Dainotto, one of the reasons for Rosen’s interest in this subject is an episode of prolactinoma he suffered from in 1990, which caused his body to develop female breasts and led him to experience a state of almost total blindness. While he was hospitalized for treatment, according to Dainotto, Rosen began to consider the story of Saint Lucy, and then turned to consider additional saints. Lucy, whose symbolic attribute is an image of two eyes set on a plate, was a beautiful virgin ordered by Pagan authorities to lose her virginity in a brothel after refusing a certain suitor. She was miraculously saved from that ordeal, yet her unrelenting belief in Christianity caused her to suffer extreme torture that culminated with her being forced to gouge out her own eyes, and finally to paid for her faith with her life.
Like the narratives constructed around esoteric objects in cabinets of wonder, Rosen’s martyrs have been endowed with a background story (the narrative provided by Dainotto) that enriches our experience of them and infuses it with additional meaning.

Even in the absence of this narrative, these paintings are clearly related to the artist’s examination of his own self-identity. They may be likened to a sort of masquerade in which Rosen participates alongside various friends, including his former teacher (in the guise of the martyr Cassius).
Throughout the history of Western art, painters ranging from Artemisia Gentileschi to Gaugin to Egon Schiele have portrayed themselves in the guise of different heroic, rebellious, suffering, or isolated martyrs.

The artist’s perception of himself as a martyr is underscored by the special frame that surrounds each of the works in this series. This almond-shaped frame is known as a mandorla (the Italian name of this fruit), and was traditionally used to surround images of the Virgin Mary or of Christ. In Rosen’s series, it might be taken to allude to a mirror reflecting its holder’s identity.

The choice of an Israeli artist to tackle the question of his own personal, sexual, and religious identity through an engagement with a European, Christian tradition is far from obvious. Rosen inserts Christian iconographic motifs into his works, while using an eclectic range of sources of inspiration: medieval illuminated manuscripts, Old Master paintings, and 19th-century photographs. By reworking well-known art historical and religious themes and infusing them with contemporary and autobiographical allusions, he transforms history into an active, dynamic force charged with new meanings.