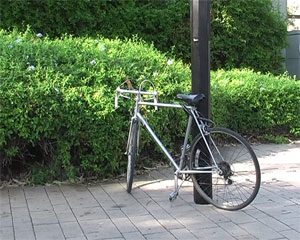 Roy Menahem Markovich draws on the aesthetics of special effects in B-movies in three works which enact a situation, where the ground is pulled out from under the pastoral world he constructs. The three scenes, which appear to have been extracted from disaster movies-falling rocks in a landslide, chained bicycles falling by themselves, the ground breaking open in an earthquake-expose the ways in which the collapse effect was created, thereby neutralizing the horror while ridiculing the manipulation which generated it.