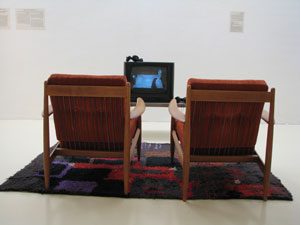 Arena Quad I & II features four hooded figures whose age and sex remain unidentifiable, and who are seen walking across an enclosed square, or quad, in a seemingly obsessive, ritualistic manner. The figures advance along an apparently random yet pre-established course, turning endlessly in what amounts to an incessant and unsuccessful effort to “exhaust space.”

The work is composed of two sequences with a similar structure: the first sequence is in color, and is accompanied by percussion music that is coordinated with the movements of the characters. The second sequence is filmed in black-and-white, and is not accompanied by sound. It is characterized by a more somber, minimalist quality, which emphasizes the essential aesthetic of the movement.

Quad is also the title of a play that Beckett wrote for German Television in 1981. The video Arena Quad I & II is based on this theatrical text, and blurs the boundaries between theatre and the visual arts.
G. L.