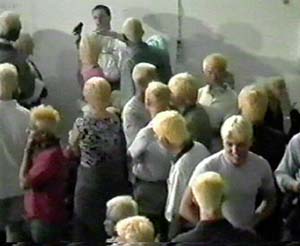 In the city of Venice there are a great number of illegal street vendors, most of them immigrants from different parts of the world. Senegalese, Chinese, citizens of Bangladesh and also southern Italians. They were asked to agree to have their hair dyed blond and were paid 120,000 lire, some 60 dollars. The only condition being that their hair be naturally dark. The procedure was done in a collective manner inside the closed doors of a warehouse, situated in the Arsenale, during the inauguration of that year’s Venice Biennial. Although the number of people programmed to take part in this operation was originally 200, it was finally down to 133 due to increasing arrival of immigrants, making it difficult to calculate with precision how many people had already entered the hall. It was then decided to shut down the entrance and calculate the number by a rough count. This caused numerous problems at the door, due to the never-ending flow of people that left or entered.

People Paid to Learn a Phrase, Casa de la Cultura de Zinacantán, Mexico, March 2001, Video, 9:25 min
Eleven Tzotzil Indian women were brought together in an auditorium to learn a phrase in Spanish, a language they did not speak. The phrase was the following: ‘I am being paid to say something, the meaning of which I ignore.’ They received 2 dollars each.