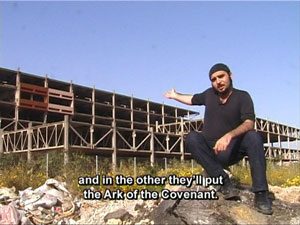 In Scandar Copti and Rabia Buchari’s video piece Truth (2003), two Palestinians from Jaffa visit non-touristy sites in the city, recounting the “history” of the place as if they were tour guides. The text is a fictive narrative ostensibly anchored in that which is seen on the surface. Thus, for example, next to a deserted structure, a debate evolves over the Temple and the location of the Tables of the Covenant in the structure’s windows; in Jaffa’s old Muslim cemetery, al-Kazachana, the camera wanders between the gravestones and on the cliff overlooking the shore, while the background dialogue revolves around the nature of the dead buried there; in a refuse dump by the beach a discussion takes place about the “vodka plant” growing in the Jabalyyah beach and the Donolo A alcohol factory; and next to the water tower an argument begins over identification of the building as the Messiah’s “Holy Grail.” Jaffa Port, the cemetery, the water tower, and the deserted building are ironically depicted by Copti and Buchari as sites of historical significance.

Israeli culture frequently refers to the erasure of the city of Jaffa lying beyond the hyphen (Tel Aviv-Jaffa). This erasure is still alive and kicking in contemporary Israeli art; one may even say that representations of Jaffa as an Arab city are a rarity. This video work brings up the issue of memory, remembrance and forgetting, in Palestinian culture in general, and in the city of Jaffa in particular; a long-lasting oblivion which is part of the general erasure of the Palestinian cities in 1948. Ironically, however, the work does not generate a meaningful, representative Palestinian national narrative.

Copti and Buchari launch an intricate process: their film refers both to the tradition of documentaries aiming at exposure of the “truth,” and to the tradition of Orientalist tour-guiding which became established in Jaffa. At the same time, they also direct irony at the Arab world; the fictions they unfold are part of a tradition of popular tales, horrifying rumors, and propagandist materials. “I’m not sure whether building an entire society on a lie is the best way to build a society,” one of them says, emphasizing the inability to adopt one truth over another. This refers not to a postmodern discourse, but rather to the harsh reality of the Palestinians in Israel, who do not trust the official mouthpieces of information of the State of Israel, nor those of the Arab regimes. Against this backdrop, Copti and Buchari create an alternative parody which they ironically dub Truth, as one of them asserts: “I don’t know whether this is the real truth, but this is the truth they want to hear.”