Shy Abady | Re-view | Back to Berlin

In the summer of 2007, I arrived in Berlin for an 28-month residency, and shortly thereafter began creating the series My Other Germany. The
series was inspired by the troubling imprints that WW2 left upon the city’s landscape. These include the ruins left by Germans as a mark of
eternal condemnation, along with the “stumbling blocks” (Stolpersteine) created by the German artist Gunther Demnig – bright square metal plates inlaid into sidewalks specifying the year of birth, and the deportation and extermination dates of Holocaust victims who lived in the vicinity. 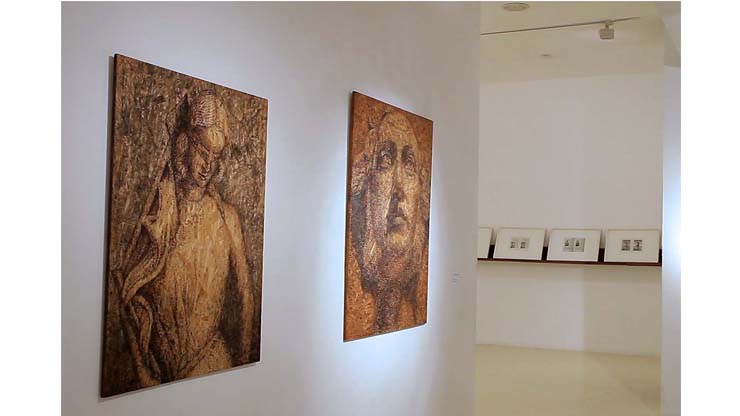 The series is a journey into the depths of German and German-Jewish history and myth, seeking something of its roots and an understanding of its unfolding. I took my initial cue from selected 18th and 19th century Prussian sculptures and monuments, mostly from the Berlin landscape.
Some of these survived intact, while others were damaged or occasionally almost completely destroyed during WW2. These sculptures paved my way into the events of the 20th century through the back door of the 19th. As an Israeli, I was on the ideology of hegemonic Israeli modernism, a highly ascetic and minimalist tradition replete with religiously iconoclastic prohibitions. As such I was intrigued and captivated by neo-classical sculpture but also inherently repelled by the Germanic codes imbedded in them. To create the series I selected fifteen OSB plates, which have a chaotic and expressive nature and are made of compressed wood tubers used in Germany as the local plywood. The images were etched on the plates with an electric pencil.