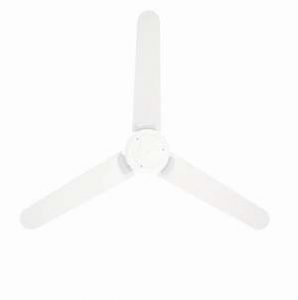 The body of works Flying Ceiling consists of a series of ten photographs depicting ceiling fans and a diptych photographed in the same cellar space, presenting an upside-down tree on one panel, and a woman lying on a bench on the other. Disparate to all appearances, both works – the fan series and the diptych – are characterized by clean coloration and formal meticulousness. The frugal coloration and the composition generate a cold, restrained atmosphere which invites discussion of the line between appearance and disappearance.

In a space devoid of perspective, with the essential minimum, the white fans hover on white walls. The arbitrary sequence of this nothingness ostensibly marks movement on a circular axis, as part of which the viewer is invited to participate in the image construction process whereby the discrete sections will be linked into a single continuum. The mechanism represented by the cross gradually loses meaning the more one tries to assemble it. In its borderline expression, with its far-fetched lightness and absurdity, it strives to draw away from us into nothingness.
The tree, on the other hand, bare and uprooted, moves along the counter axis. It sinks into what appears to be a black puddle of invisibility or a dark hole. The motif of reversal and doubling, as in the fan series, resonates like an echo from the black reflection mirroring sections of the tree.
The same line between symbolical disappearance and the reconstruction which lends form and meaning to the illusion of the primordial object is also discernible in the figure of the woman lying on the bench, her body marked with the names of bones inscribed in a foreign language with black ink on her naked body. The attempt to extract the self from the body or to conquer it from the outside, however convincing, remains undeciphered.
The dichotomous rift between life and death, between meaning and the lack thereof, between the deconstructed and the structured, leaves its imprint through the gap, the empty space, and the different air they convey.

Tal Shochat (1974) was born in Israel. Lives and works in Tel Aviv.