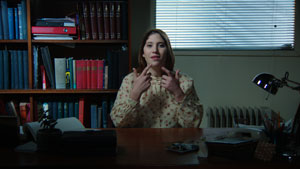 Claude Lanzmann’s monumental film Shoah (1985) serves as the point of departure for this video installation by Tali Keren. Lanzmann’s film is composed of a series of testimonies, and includes no archival footage; the emphasis is on the use of language, on the act of narration, and on the theatrical dimension of memory and the imagination. In The Interpreter, Keren similarly shifts the focus from the horrors of the Holocaust to the acts of storytelling and translation, which partake of the examination of historical narratives. The soundtrack is composed of excerpted testimonies from Lanzamnn’s film, while the work centers on the figure of the interpreter – an invisible presence that appears as little more than a transparent mediator between Lanzmann and his subjects.

Keren’s work involves a double act of translation: she re-recorded the testimonies excerpted from Lanzmann’s Shoah, replacing the voices of the original witnesses with those of Israeli historians and educational-television directors. This new soundtrack was subsequently translated into sign language. The use of sign language, which is remarkably visual and performative, underscores the act of translation, and makes it palpably present as the focal point of the work. Keren thus emphasizes the gap between the original and the translation, and suggests that this gap may serve as a point of departure for studying the formation of historical narratives.

born in Jerusalem, Israel 1982 ; lives and works in Tel Aviv