“Life style” is more than just a way of life – it’s the way to the good life, a code for leisure time and a clear characteristic of the Western dream of globalism. Life style is a vital component in creating a contemporary identity. It’s the way we aspire to produce ourselves. In the past, the consumerist system marketed life experiences designed to help us appear like we belong to a particular ocial class; today it revolves around self-individualization. The individual is required to be special and unique. To be different – just like everyone else. Talia Link (b. 1984, Israel; lives in New York) has invented herself as the Life Style High Priestess of DIY (Do It Yourself). She releases instructional videos presenting herself trying out various beauty products and creating fashion items from materials ordered online. All this activity is conducted from her bed – and Talia Link’s bed is an oasis. It is the place from which she communicates with her environment, mixing professional and personal, private and pub lic aspects. The ed is the place where Link blurs the boundaries between what she does and what she is. 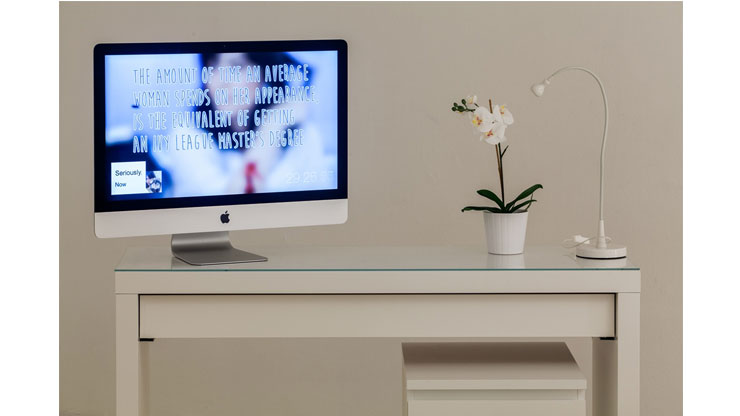 “Life stylization” is the implementation of the social process aimed at achieving uniqueness (individualization). It is a response to the disintegration of distinct class and national identities. In the privatized world, these collective identities no longer fulfil their role. We perceive ourselves within global contexts and on a global scale, in which we are no longer just citizens of a certain country but first and foremost consumers that differentiate themselves by buying and using products. Privatization and individualization walk hand in hand, and are well exemplified by DIY culture. Although this culture originally began as a way to disengage from the ready-made, the pre-selected, and the commercial, it now functions as an allegory of neoliberalist society. A society that views the public sphere (including contact with state institutions and corporations) as the source that provides materials for individuals, who are then required to assemble them in order to “produce” their lives. Lacking supportive community structures, individualism is elevated to monumental importance. The value of citizen-consumers is determined by the scope of actions they take to ensure their independence and stand alone in the face of life’s problems.

DIY culture addresses the yearning for ownership in this context of neoliberal ideology. It resembles a food supplement used to complement the ideological conditions of the capitalist system. The belief that we can somehow bypass capitalist rules by creating objects of our own does not consider the fact that this is actually an internalization of the techniques, practices and justifications used to control us – which we then enact voluntarily. We live our lives according to market principles and see ourselves as productive, marketing, optimizing units. Having discerned this, Link follows the genre’s rules while also undermining them. She combines harsh and scathing critique of the methods employed with a candid motivation to instigate change with empowerment tutorials. She provides an option of exiting the capitalist framework while using its methods excessively and maintaining firm belief in it. At first glance, she functions within the bounds of what is allowed and accepted for women today. However, through slight deviations, she creates a contemporary, alternative female prototype.

Viral videos are undeniably characteristic of the private and public present. They provide reference points for identification and rebuke, shape public agendas, direct and confirm our views in the sociopolitical world. The digital revolution has given us all access to the media, and opened the door to an unprecedented era of knowledge sharing networks, which allow us to passively participate as observers or to take part actively as creators, producers, and distributors of content. Link has chosen to become part of a web phenomenon of tutorial videos made by (primarily young) women offering tips and practical tools, in the DIY spirit, to shape female identity. This method teaches home-based self-creation, ostensibly liberating us from our reliance on mass production and mechanisms of consumerism. The DIY of the twentieth century uses viral means to globally distribute content preaching the virtues of localization.

Link has produced a series of videos presenting her own beauty regimen. In one, she documents the grooming of her unibrow. Her actions are meticulous and perfect, but the brows she shapes are not the fashionable form, but rather have the “wrong” look. In another video, she examines make-up products designed to create fake contours and effects to emphasize facial structure through layering. The process includes a preliminary sketch of darker areas and highlighting the cheeks, nose and chin with bright white foundation. Link shows how you can hide blemishes and create the illusion of the perfect face. The process is long and tedious, and the final look slightly artificial (resembling facial imaging in 3-D animation), but it photographs wonderfully. Link demonstrates the process on herself but presents it in high speed – and from end to beginning.
In another high-speed video, the artist shares her daily 30-minute make-up routine (not including clothes, shoes and accessory selection). Starting with make-up foundation to cover skin blemishes, continuing with lightening the darker areas beneath the eyes and drawing contours to emphasize eyes, cheekbones and lips, and ending with brushing of hair, the half-hour ritual is speeded up to a 4-minute video. A comprehensive survey conducted in the United States in 2014 reveals that 78% of women invest an hour a day in grooming. This translates to 365 hours a year. Talia Link presents the number of study hours of her Master’s degree program: 367 hours a year. This means the average time women spend on their physical appearance is equivalent to the time required to complete a Master’s degree in an Ivy League university.

A third video demonstrates how to create “Monica Lewinsky nails”, with Link instructing viewers on how to cut and paste on nails a Monica Lewinsky figure (created from a collection of Google images and then digitally processed). Lewinsky is arguably the first significant victim of online bullying, and specifically of a cruel “slut shaming” campaign. The young intern that had brief relations with President Bill Clinton became a target of derision on a massive scale. She was transformed from a person into a term and comic material. One action of hers, a decision made in her early twenties, has defined the rest of her life. Every aspect of her appearance became indelibly associated with the sexual acts performed in the Oval Office. Her “normal” appearance, her weight and full lips – all became the articles of her indictment. While Lewinsky was branded in disgrace and punished for her sexual conduct by men and women alike, Clinton remains one of the most respected men in the world. The powerful man was tagged as “naughty,” while the former intern was stigmatized. This is clearly the reason Link chooses her as a role model. She extracts her from collective memory, pastes her on her well-groomed nails, and represents her anew to the world. She exposes our blind spot regarding Lewinsky, forcing us to find a new way to identify with this talented young women, who suffered from body image problems and an attraction to authority figures. She reveals Monica Lewinsky the person, and uses this opportunity to encourage us to reexamine issues of sexual harassment in the workplace.

Link’s lipstick feminism employs web rules, presents unexpected female role models and the objectification of male figures to revile society’s oppressive forces. She gleefully adopts female stereotypes and over-emphasizes them. She presents a much needed feminist option, as the original feminist principles are now in service to another master. The women’s liberation movement has been swallowed up and appropriated by the free market. Feminist ideas, formerly part of a radical worldview, are increasingly defined through individualistic values. The movement, once a call for social solidarity, is now a proponent of female entrepreneurship. Instead of mutual accountability, now the call focuses on the benefits of personal promotion and meritocracy. Feminism was supposed to be the harbinger of a world of gender equality in a participatory democratic framework that supported identification with others. But capitalism, being capitalism, has enlisted these oppositional ideas to serve its own exclusive interests. Equality has become a platform for developing new global markets, for consumers are all equal. The struggle for women’s liberation has been decentralized and isolated.

Link’s weapons in this struggle are her videos, virtual installations and objects. They serve her in her investigation of female identity and representation in contemporary culture. Instructing us on how to create a pillow in the shape of Nicole Kidman’s face, she opens a discussion of unrealistic ideals of beauty. Printing on clothes comebacks to male catcalls on the street, she reveals the harassing gaze that tracks every woman in the public sphere. Making a perfume inspired by the true story of a Turkish woman who beheaded her rapist, she clearly delineates victimization. Talia Link finds her strength within the traumatic experience of being a woman in the capitalist age and does so with humor, girl power, and heaps of life style.