Tu Pei-Shih | Boundaries on the Move

Tu Pei-Shih, The Adventures in Mount Yu V (From Michel Foucault to Our Glorious Future), 2011, video
Courtesy of the Project Fulfill Art Space 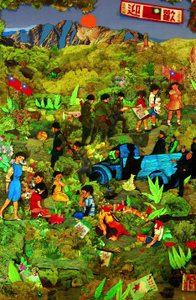 Tu Pei-Shih’s animations treat contemporary political, economic and social issues. The Adventures in Mount Yu V (From Michel Foucault to Our Glorious Future) transforms the pleasantly naive illustrations found in traditional Taiwanese school textbooks into a partly fictitious colonial history of Taiwan. In this way, the film reveals the very nature of dominant, mainstream history as fabricated and fragmented. In this work, Taiwan’s tallest peak, Mt. Yu (3,952 m) serves both as background and symbol of Taiwanese identity. The Adventures in Mount Yu opens with the French philosopher Michel Foucault lost in thought on a grassy field, quickly skipping to images of inhabitants drawn from Taiwanese colonial history including Taiwan natives, the Dutch and Spanish, the Qing Dynasty military leader Koxinga, the Japanese, Chiang Kai-Shek and the Kuomintang, among others. The video ends after recounting the 228 Incident, an event of large-scale political suppression familiar to the people of Taiwan but not included in the official textbooks published by the National Institute for Compilation and Translations previously.