Uriel Miron’s one-person exhibition at Herzliya Museum of Contemporary Art spans three bodies of work created in recent years: the first, installed in the large hall, is a group of four large-scale, white, wooden sculptures (2013 – 2015), whose unique shape is at once amorphous, minimalistic, and relatively abstract, like a drawn line extending into the exhibition space; the second is the sculptural installation Unraveling (2012), comprise of manipulated generic plastic chairs – a project originally created for Super bien! greenhouse for contemporary art, Berlin; and the third is a series of works on paper – drawings and screenprints. To a large extent, the white plastic chair is the point of departure for the three bodies of work; its presence in the works is conspicuous, and it may be regarded as a key thematic element. 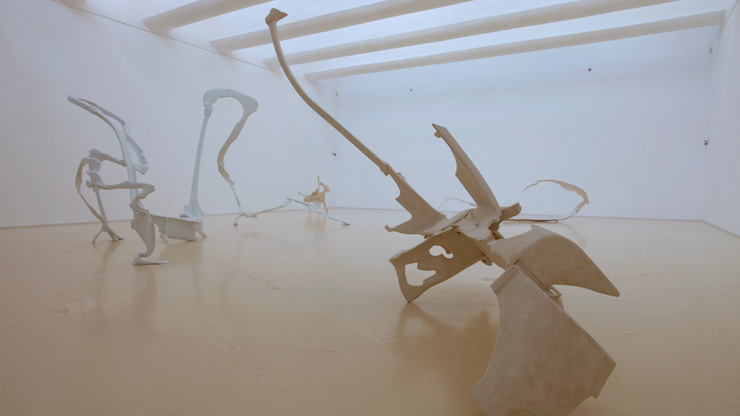 A common, generic, white plastic chair undergoes a series of material transformations and diverse formal distortions, which prevent it from fulfilling its designated function. This significant metamorphosis cuts through the familiar domestic space to a remote surreal space. Manipulation of the artificial plastic chair reveals in it organic, zoological, and botanical (bones, joints, plants, insects) or paleontological (parts of ancient skeletons of extinct animals) contexts and potentials. The white wooden sculptures presented in the large hall, whose origin and model was a white plastic chair, are a Janus-faced entity combining natural and supernatural elements as mechanical parts or pieces of a chassis – but also as bones and joints left from giant primordial animals. Miron himself presents the rudiments of his praxis in evolutionary terms: