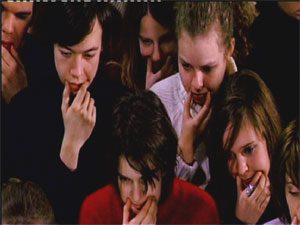 Victor Alimpiev’s two works address the relationship between the individual and the collective in different ways. Spontaneous, mundane, prosaic gestures become theatrical and pathos-filled when performed by large groups of people directed by the artist. Thus, for example, gestures customarily regarded as involuntarily surrendering embarrassment or frustration, such as scratching one’s head and tossing away a plastic bag, become a dramatic theatrical gesture of a Greek choir, whereas restless drumming on a school desk carries an implicit causal link with the natural forces. The works explore the tension between the private and the public, between the authentic and false gesture, between spontaneity and mimicry.