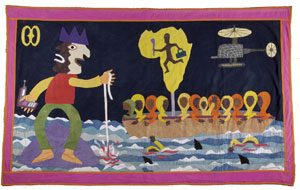 Prior to his first visit to Benin just before his 18th birthday, William Adjété Wilson had very little contact with his African family and was astonished to feel like a foreigner there. His personal history emerges at the point where world history meets the history of art. His history began when he met his great-grandmother Princess Lawson, aged 94 at the time, and his grandmother Helen d’Almeida, a fabric merchant in Cotonou – a Ouidah native and descendant of slaves who was freed in Brazil and returned home early in the 18th century. In the West it was the Enlightenment, in Africa the darkness.

William Wilson left Orléans for Paris to study anthropology and philosophy. He started making sketches with no intention of being an artist, as he was involved in many activities such as fashion, journalism, music, etc. He later started making large-scale pastel drawings, after he came across a more intellectual approach through his various encounters in the field of fine art.
During a one year stay in New York in 1986-87, he produced his first acrylic easel paintings, his first book illustrations and his first work in three dimensions, the Hundred Chairs series.

Since 1988, while he continues to exhibit and receive awards, he expanded his artistic activity to other fields, creating sets and costumes for the theater and for music video clips, doing illustrations for newspapers and magazines, drawing posters, designing material, tableware, accessories, furniture and even gardens and publishing children’s books.