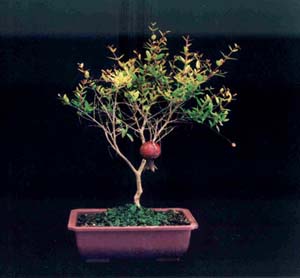 Bonsai: The Cedar, the Shittah Tree, and the Myrtle, and the Oil Tree

It is disconcerting to plant in bonsai – the Japanese art of dwarfing and shaping plants – the cedar, the shittah tree (acacia), the myrtle, and the oil tree, or to set in a handful of earth, within a stylized container, the fir tree, and the pine, and the box tree, but not together. The hybrid generated by the crossing of two lingual and cultural structures – Eretz-Israeli flora and a Japanese miniature imitation of nature – shakes the viewer like a hybrid product that causes a troubling, thought-provoking, aesthetic disruption.

Bonsai is not a part of a whole. It is an entity that functions as an independent system, being detached from the ground. It is a natural-artificial microcosm shaped through random restriction of growth by wiring branches, twisting, trimming, truncating, wounding, uprooting, root pruning, under-fertilization and underfeeding. Bonsai is based on strict rules of re-shaping nature. The artist has unshakable control of this microcosm, but at the same time, this human intervention is indiscernible, and the bonsai appears natural and harmonious.

Yehudit Matzkel’s photographs reinforce the gap between the organic “Israeli” image of Eretz-Israeli plants and the sterility of the bonsai through meticulous camera work. The photograph accentuates the detachment from its natural setting through the choice of a shooting location, a neutral studio space rather than the bonsai’s growing site, a greenhouse or the open air. Matzkel opts for a specific type of photography, with its own context and language, a style of portrait photographs taken in a professional studio: the subject stands with his back against a black backdrop, and is shot with frontal lighting.

Another important aspect is the works’ mode of presentation in the exhibition as well as the catalogue. Matzkel juxtaposes two disparate structures, textual (words) and iconic (image), whose combination generates a new system. On the one hand – the name of the plant in the biblical sources, on the other – its photograph in bonsai form. Thus, for example, the text acquires a denotative value by indicating that this tree is a fig. In order to believe the text, the viewer must first relinquish his inner world, his ethos, sentiments, language and culture. He must push back the cultural image of the tree, which contains the dimensional proportions with the person finding shelter under it, an important quality in a culture spun under conditions of burning sun. A verse such as “every man under his vine and under his fig tree,” (1 Kings, 5:5), for example, sounds grotesque in view of the dwarfed fig in the bonsai photograph.

Yehudit Matzkel does not call to abandon an ethos or a sentiment, and the critical context arising from her work is stratified. The jolt caused by a paradox such as the cedar of Lebanon that has flourished in bonsai to the height of a mere few centimeters, is thought-provoking precisely due to the insight that the viewer is unwilling to yield the plant’s stable place in his cultural world. This jolt confronts the viewer with questions pertaining to the very essence of the ostensibly self-evident affinity with Eretz-Israeli plants, presenting a quandary about its modes of structuring as a collective cultural identity with an agenda all its own. On another level, the question arises, whether there is any connection between the affinity with nature fostered for centuries in the Diaspora, and the preservation of nature as an everyday consciousness of the people living in Zion. Is there a link between the images of nature in the context of a Biblical past, its images as a future in the vision of the end of days, and the image it is given in the present, in a concrete setting strewn with conflicts, destruction, tree uprooting for nationalistic and political reasons, pollution, artificial gardening and sterile landscaping in the public domain, and construction oblivious of the landscape?
The local-national context of the Israeli plant incorporates the universal context that indicates the affinity between inter-personal relations and the evolving relationship between man and nature: “and they shall beat their swords into plowshares, and their spears into pruninghooks; nation shall not lift up a sword against nation, neither shall they learn war any more. But they shall sit every man under his vine and under his fig tree; and none shall make them afraid;” (Micah 4: 3-4).

Galia Bar Or
The exhibition and catalogue were produced by Mishkan Le’Omanut, Museum of Art, Ein Harod and the Herzliya Museum of Contemporary Art