Yohanan Simon (1905–1975) is known and admired as one of Israel’s ideological Realist painters, who were fully committed to the socialist collective idea. He was one of the leading proponents of iconic portrayals of the kibbutz as an ideal lifestyle. This exhibition shows an entirely different aspect of his character: intimate, fun-loving, highly affectionate, somewhat playful, and above all, individualist.[2] As explained by one of his daughters, Aya Simon Ben-Sedef, who conceived the idea of the exhibition, “After seventeen years of membership of Kibbutz Gan-Shmuel, as he approached the age of fifty, my father, the painter Yohanan Simon, left the kibbutz, my mother, Sarah, and us girls – Nitza and Aya – and took off to see the world. During his travels, he sent me and my sister Nitza a series of illustrated letters. I collected them.”[3] In his letters and postcards, Simon depicts himself as a slim, dark man, with black hair and a very large nose. Some of the illustrations feature only the body in thin lines and the head with the large nose.

exhibition is one of a series of exhibitions titled Collection+ at the Herzliya Museum of Contemporary Art, which was prompted by the wish to delve more deeply into the museum’s permanent collection and retrieve for public view works that are generally hidden away in its vaults. Simon was one of the first artists exhibited at the museum, as early as 1964, when the venue was still housed in an apartment on Bar-Ilan Street in the city. Subsequently, several of his works were donated to the museum’s collection – including an illustrated page which he created expressly for the museum’s opening event, in which he portrays the whims of a wealthy collector.

Apart from their beauty, Simon’s illustrated letters and postcards provide a glimpse into the personal and family facets of his life, as well as into aspects of his artistic work. The research surrounding drawings and paintings on postcards and letters is one of the most compelling in the history of plastic arts. (In the digital era, letter writing has dwindled to the point of being in danger of becoming a lost art, but I believe that it will make a comeback – much like vinyl records and other retro items in recent years.) Personal correspondence reveals elements that do not necessarily feature in the artistic oeuvre produced by the artist for the public at large. Thus, we have the opportunity to be acquainted with the artist’s thinking and deliberations, even his most profound sentiments. In some instances, an examination of an artist’s personal correspondence, often many years later, answers questions that had been unresolved until its discovery – such as the dates of certain artworks, or information about where they were created. Illustrated letters by the artist also serve as a primary source for his biography. The correspondence between Vincent van Gogh and his brother Theo are a famous case in point, as are the postcards and letters between the poet Else Lasker-Schüler and the painter Franz Marc – a priceless treasure for art historians, the discovery of which has also enhanced our understanding of certain themes in their work. Similarly, we learn details of Simon’s early career as a painter from the letters that he sent his daughters from Paris and London in May 1951. Generally, the drawings in the letters that Simon sent from various parts of the world are a testament to his superb ability in depicting landscapes, as well as to his art-school training in France. In 1952, when Simon was still living on the kibbutz, where he worked in the orange groves (as evident from an illustration on view in the exhibition in which he is working with a hoe), he wrote to a friend by the name of Oppenheimer, who had fled from Germany to London, where he established an art gallery. In his letter, Simon asks about the paintings that he had sent Oppenheimer for an exhibition in London – something that art historians had known nothing about prior to letter’s discovery.

In Simon’s letters, the pictorial motif is very prominent, just as the narrative element is exceptionally conspicuous in his paintings. The narrative character of his art work is particularly noticeable in the kibbutz period of his work – before he began to paint in a more abstract manner, circa 1954, in South America. His combination of narrative and painting is reminiscent of the medieval and Renaissance murals that depicted the stories of the Hebrew Bible, the New Testament, and the lives of Christian saints on the walls of churches for didactic purposes – or, in the modern era, of comics and graphic novels. In the illustrations that he produced in his correspondence he allowed himself to leave behind the highly coherent social outlook of his oil paintings (a Mexican-style social realism, which he preferred to the staid socialist realism of the Soviet variety). His letters were not meant to serve an ideal, but were for himself and for his loved ones. His fondness for the illustrations that accompanied his letters is very apparent, and they may be seen as a text in its own right – and a highly humorous one, at that. In this regard, the paintings in the exhibition highlight the complexity of Simon’s work. The show features well-known and explicitly ideological works with a clear South American influence, coupled with others characterized – like the illustrations in his correspondence – by a highly literary narrative and expressive, colorful vitality. 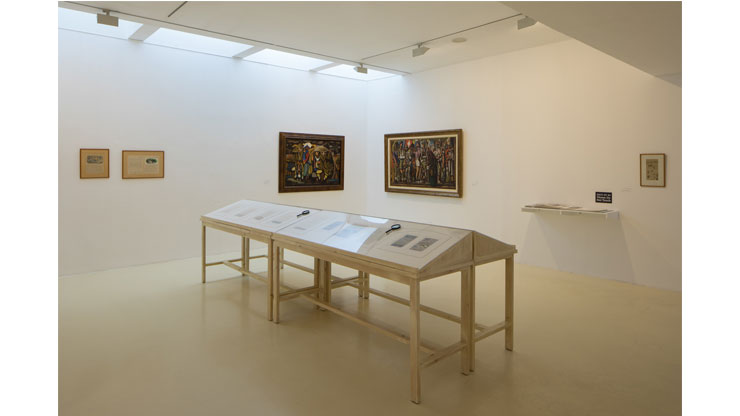