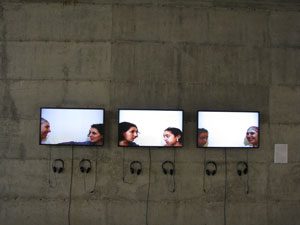 The video triptych Mother Tongue is composed of three separate screens that feature three conversations – between Sedira and her mother, Sedira and her daughter, and Sedira’s mother and daughter. Each of the three women talks to the others in her mother tongue: the grandmother, who was raised in Algeria, speaks in Arabic. Sedira, who was born in Paris, uses French. Her daughter, who grew up in London, speaks in English. The artist is thus the only one of the three who can understand the two others. She is the link between the grandmother and the granddaughter, who are unable to communicate in a common language.
The long silences and empty spaces that separate the two women on each of the screens emphasize the process of cultural loss tied up in the loss of a language. When immigrant children are no longer able to speak the language of their parents and grandparents, they also lose many of the religious, social and cultural values that are inherently attached to the forgotten language.
G. L.