Rainbow Warriors, 1997, photograph taken at a Rainbow Gathering in Greece
Once a year the “Rainbow Tribe” gathers at a secluded location in nature. Thousands of people from the all over world come together in an informal, nonhierarchical manner, creating a temporary community that cares for all its members on a voluntary and equal basis. Since the first gathering in Colorado at the end of the hippie era, the meetings have wandered from one site to another in different countries throughout the world. In each venue the tribal rituals are modeled after the era that preceded institutionalized religions and under the influence of the indigenous traditions: neo-paganism in Europe, Indian tribes in America, Canaanite and Bedouin tribes in Israel.
Rainbow is a unique tribe delimited spatially and temporally. Anyone may take part in the meeting without commitment and without forgoing one’s usual way of life, provided the he respect the tribe’s rules. The Rainbow gathering functions as a transient ex-territory that provides an alternative to the modern world, drawing on a blend of unordered New Age spiritual perceptions. Some identify the Rainbow gatherings with the Rainbow Warriors myth, attributed to the Indian Hopi tribe. According to that myth, when the land becomes polluted, and the water undrinkable and people die, the Rainbow Warriors will return to the earth, and people of all nations and colors will live in harmony; they will cleanse the earth and bring peace and brotherhood to humanity. Probably originating in a 1960s book, the legend expresses the major values adhered by the tribe members, such as equality, liberalism, peace, and harmony amongst men and between man and nature. At the same time, the gathering is typified by drawing away from the modern world, referred to as “Babylon,” and an active rejection of everything it stands for. When the gathering ends, tribe members leave the temporary utopia, returning to their ordinary lives. 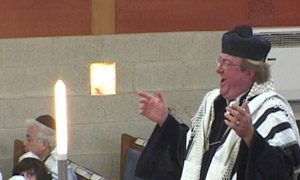 Adon Olam, 2005, video, 7 min
Zohar Kaniel, whose works often address spiritual and religious rituals, documented a bar-mitzvah ceremony held at the Kfar Shmaryahu synagogue, with the participation of cantor Gabi Oren and the Heikhal Habanim choir. The work focuses on the singing of Adon Olam, one of the oldest, best-known hymns, which has been arranged numerous times over the years. Viewing the video, one is engulfed by a sense of strangeness which is soon elucidated with the gradual realization that in the ceremony before us the song was adapted to the melody of the 1985 Live Aid hit, We Are the World. The film is centered not on the protagonist of the event – the bar-mitzvah boy, who appears only briefly – but rather on the choir shot with a single camera in a manner reminiscent of the depiction of the musicians harnessed to record the hit single whose profits were donated for aiding Africa in the accompanying clip.
The intrusion of the secular media-entertainment world into the synagogue, which presumably stemmed from a desire to bring the 13 year olds of the 2000s closer to a 12th century religious text, raises questions about form versus content, about the role of traditional texts in secular society and the mutual impact of the encounter between the two worlds.

Zohar Kaniel (1967) was born in Israel. Lives and works in Berlin.