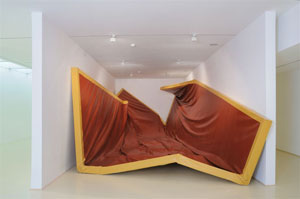 “I am for an art that takes its form from the lines of life itself, that twists and extends and accumulates and spits and drips, and is heavy and coarse and blunt and sweet and stupid as life itself.
I am for art that is put on and taken off, like pants, which develops holes, like socks, which is eaten, like a piece of pie, or abandoned with great contempt, like a piece of shit.
I am for art covered with bandages, I am for art that limps and rolls and runs and jumps.”

Claes Oldenburg, Untitled, 1961
Angela de la Cruz’ artworks center on life itself, and in particular on the human body. As a student in the mid-1990s, the first time she broke the stretcher of a canvas and installed it in a corner of the gallery instead of on a wall, she realized that there were new physical and conceptual spaces she could explore. Having discovered that the painting’s unconventional position in space contained the potential for an alternative reading, endowing the work with a new narrative related to its physical position, she called this seminal painting Ashamed.
The titles of Angela de La Cruz’s works continue to have great importance and to reveal the various emotions she attributes to her paintings – which she describes as self-conscious entities that express something about themselves as objects, while suggesting how they could be hung or integrated into the surrounding space.

Larger than Life is indeed a monumental artwork that blurs the boundaries, or limits, of the art of painting, transforming the traditional two-dimensional canvas into a three-dimensional artwork. Angela de la Cruz “broken” painting is not a perfect creation; on the contrary, it is unique and remarkable precisely due to its imperfection and to its awkward position in relation to the space it occupies.

Angela de la Cruz’ manner of integrating life and art may be summed up in her reply to the Herzliya Museum’s concern about possible cracks that might form in the process of installing such a large work. As she observed, “Cracks are part of the work, and life is full of cracks…”