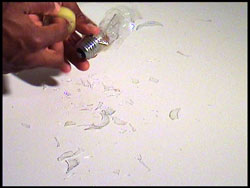 In this poetic video work, Carlos Bunga performs an action that we would normally view as irreversible: he shatters a light bulb with the sharp blow of a hammer. As the broken shards of glass scatter and fall, the action seems to be accomplished, and the boundary, or limit, between “before” and “after” seems to have been irrevocably crossed.

Nevertheless, as soon as he is finished performing this act of destruction, the artist engages in the opposite activities – reconstruction and creation-collecting the shattered bits of glass and gluing them back together in order to create a new kind of light bulb. The artist’s final creation echoes the appearance of the found object with which he began, yet it has been re-shaped into something completely different: the everyday object has been transformed into an artwork.

Is the act of destruction followed by a process of reconstruction a metaphor for artistic creativity? The question remains open, yet the process captured in this video work clearly alludes to the work method often used by Carlos Bunga to create his large installations. In these installations, the artist usually builds architectural constructions and then partially destroys them, leaving the vestiges of the original structure to stand witness to its former existence.