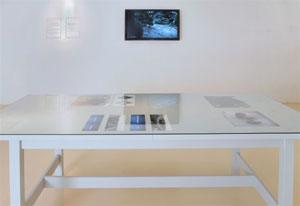 This video work explores the subjective nature of human perceptions of space and time. The opening shot, which offers a closeup view of a wood and the insects that inhabit it, captures the pastoral, peaceful character of this natural expanse. A few seconds later, a different camera angle reveals the “wood” to be a group of miniature Bonsai trees, planted underneath much taller vegetation. When the camera zooms out, cars can be seen speeding along a highway behind the greenery. As the camera continues to move further out and higher up, the view comes to include passing trains and high-rise buildings in the background.
The location chosen by Irijalba is in fact a green “island” surrounded by highways on the outskirts of Beijing – an area that commuters routinely pass by as they travel by train or car, yet never actually get to see. As the artist explains, it is a space that has been encircled by commuters thousands of times, yet is never actually approached. Although this place exists in the real world, it does not impact anyone’s experience, since no one really sees it or thinks about it.
As this work demonstrates, our daily experience includes expressly created delimitations between the spheres of life and work and between other spaces that we fail to perceive despite their physical proximity, and whose existence unfolds parallel to our own at an entirely different tempo.