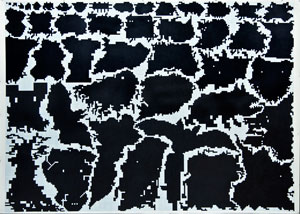 The series Hello First Grade!, expresses the ruling principles of three mathematical series: an ascending arithmetic series of natural numbers, arithmetic series of square consecutive numbers in which each number is raised to the power of two, and Fibonacci series, in which each term is the sum of the two proceeding numbers. Fibonacci series was first described by Leonardo Fibonacci in 1202 in Liber Abaci (or The Book of the Abacus). Fibonacci explains in different ways the meaning of the series’ ruling principles and its ability to model natural phenomena and solve quantitative problems, such as “calculating the number of possibilities a person has of going up a ladder with n steps, when each time he has to decide whether to go up one step or two”.
The geometric rendering of the series is based on filling in areas in proportion to the series’ terms. The geometrical shapes, reminiscent of islands and continents, evolve and expand according to laws of mathematical order, dictating the number of blackened squares on a paper with hand-made grid. The expansion of the series’ terms on the paper changes and develops from one work to another – with Fibonacci series demonstrating an aggressive progression that seems to be breaking through the very laws on which it is founded.
Hello First Grade! is a plastic articulation of mathematics, creating a physical representation of an abstract theory, echoing the order of the world.

Courtesy of the artist and Julie M. Gallery, Tel Aviv