Gerardo Custance
Born in Madrid, 1976; lives and works in Paris and Madrid 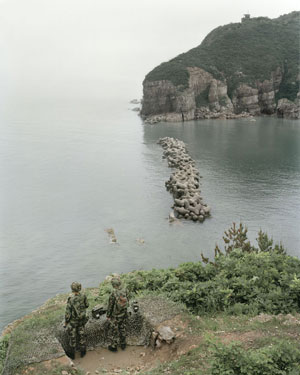 In March 2010, a serious military incident took place when a South Korean ship was sunk by a sub-aquatic North Korean missile. Forty-six South Korean soldiers lost their lives, and the tensions between South and North Korea soared.
Following this event, Gerardo Custance travelled to the island of Baengnyeong, which lies on the maritime border between North and South Korea. Located at a short distance from the North Korean shore, this island serves as an observation spot from which South Korea carefully monitors the maneuvers of its northern neighbor.
Gerardo Custance wanted to photograph a series of works centered on the theme of the sea, which he describes as representing freedom and the power of nature in our collective consciousness. For this artist, as for most people, the sea represents a vast, unlimited and unconquerable expanse.
Nevertheless, in this particular location, the sea is scarred by artificially delimited, manmade frontiers. The island of Baengnyeong, a magnificent and exotic spot, has been robbed of its natural beauty by an armed conflict that is deforming the landscape. In Custance’s own words, “This is a landscape pervaded by silence, which invites silence in return. These photographs provide a critical view of reality, and point to the need to renew the essential relationship between mankind and the earth we inhabit.”