The video follows an ostrich family migrating to a new habitat, like a custom-made imitation of a BBC nature program (for example). It tells a melodramatic, sensitive story about the ostrich chick, the firstborn, who is jealous of her newly born chick brother, and about the delicate emotional relationships within the family that become turbulent as a result.
To be more accurate: we are concerned with a very specific type of nature documentary (the one usually preserved for human apes) that focuses on a single family unit. It strives to elicit empathy toward the animal by naming the family members and constructing the film as a family melodrama with all that implies (such as the classical films about Jane Goodall’s chimps). 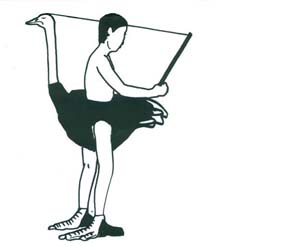 These nature films usually convey the following assumption to the human viewer: this is what a natural family looks like, this is how you should behave. Their underlying narrative, however, is in fact a projection of human cultural ideologies woven into the images by means of the cinematic montage and the narrator’s voice.
For several years now, Guy Ben-Ner has been exploring video as an option for making home movies. This preoccupation stems from some moral dilemmas with which the artist is confronted: he can either work in the studio but spend his time away from his family, or be an exemplary father but away from the studio. The option of working at home with the kids has become a fruitful ‘compromise,’ and the video medium has become one of the best tools. It is as if saying: “I’m at home, but you have to pay the price.”

The current video is yet another chapter, another elaboration of these ideas. As a travelogue, it documents the family’s move to New York for studies (the ostriches migrate to a new habitat in search of food. They are migrants). The artist is particularly interested in the structure of the ostrich family unit, and in the fact that the father plays a very active role in guarding and incubating the eggs, and in raising the chicks after their hatching. (In fact, in professional literature, the male ostrich is sometimes described as a “male mother”).