Using the musical compositions and published writings of German composer Richard Wagner as a starting point, Guy Goldstein (b. 1974) strategically employs the prohibited – the taboo – to illuminate the relationships between government, religion, and society. Using one of the most notorious art works as a test case, he engages with it in a way that not only makes reference to the unique nature of historical European racist crimes but also cautions against any agenda-serving manipulation or censorship in art or on its behalf.

Published under the pseudonym K. Freigedank (Free Thinker) in 1850, Wagner’s article “Das Judenthum in der Musik” (Jewishness in Music) was paramount in planting the seeds of German nationalism and anti-Semitic sentiment in the 19th century. Goldstein boldly appropriates the Friegedank alias as a title for his own current installation. He uses the medium of sound – specifically, pirated radio transmission – to disassemble and restructure Wagner’s opera Rienzi, der Letzte der Tribunen, converting illicit text into music and transforming the physical space itself into a music box. The Rienzi narrative is rife with nationalistic metaphors that later inspired Adolf Hitler as the Nazi Party gained momentum, and Goldstein’s reworking of the forbidden music showcases the power that lies in the manipulation of art for political agenda. The installation is truly experiential – to stand in Goldstein’s “music box” is to absorb through the senses the emotional intensity of Wagner in real time. It sheds a humanist light on myth, censorship, and populism, and it sparks robust dialogue on how art, in all its forms, defines and shapes cultural and political identity.

While challenging in its acknowledgement of the anti-Semitic fervor that was so horrifically woven into the fabric of the Third Reich, Freigedank takes a critical look at the threat of cultural censorship and discrimination on the basis of national, socio-political, and sectarian affiliation. Though often easier to stand idly by, Goldstein reminds us of the dangers of complacency and the importance of free expression. 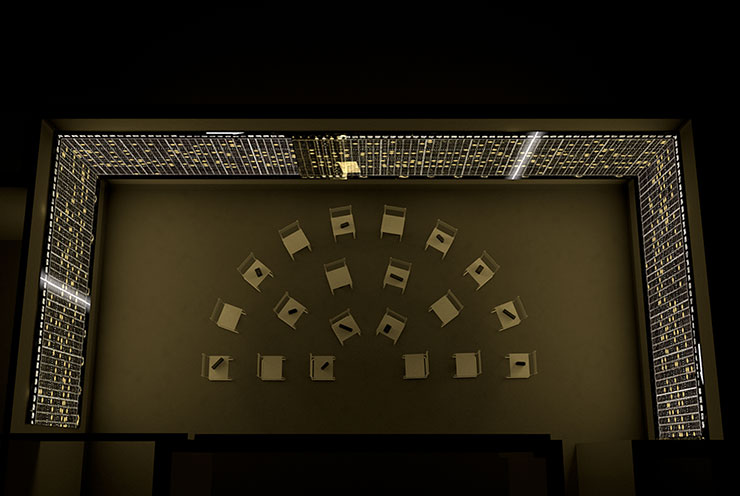 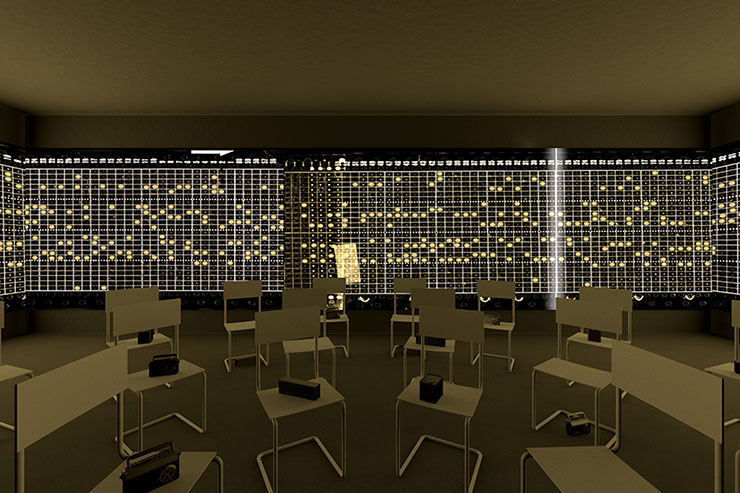 The Keshet Award for Contemporary Art

The Herzliya Museum of Contemporary Art is pleased to present an exhibition by the inaugural recipient of the Keshet Award for Contemporary Art, founded by the Bar-Gil Avidan family. The Keshet Award Foundation intends to present at the museum an exhibition by an Israeli artist every two years, over a period of ten years, to be curated by an international curator, in a bid to foster a significant dialogue between them. We hope that this will lead to the forging of cultural bridges and new professional ties, thereby supporting Israeli art. The Keshet Award for Contemporary Art is the first prize to be awarded by the Herzliya Museum of Contemporary Art, and we are most grateful to Keren Bar-Gil and Ran Avidan for their generous and significant donation. Special thanks and appreciation go to the curator of the current exhibition, Louis Grachos, director of The Contemporary Austin in Texas, USA, who has accepted our invitation with an open heart and great curiosity about art in Israel.

A professional committee of artists, curators, and scholars has selected ten artists as candidates for this year’s prize. The committee members include the prize’s founder and donor, Keren Bar-Gil; the curator Yona Fischer; the artist Prof. Yitzhak Livneh; the artist Zoya Cherkassky; and the art researcher and curator Dr. Yael Guilat. Following visits to the candidates’ studios and in-depth conversations with them, the curator Louis Grachos finally chose Guy Goldstein and his proposed project for this first exhibition. Much to our delight, the connection between the artist and the curator has also resulted in an invitation extended to Goldstein to exhibit his works at The Contemporary Austin in 2019.

Guy Goldstein was born in 1974, and lives and works in Tel Aviv. He has a bachelor’s degree from the NB Haifa School of Design and a master’s degree from the Bezalel Academy of Arts and Design, Jerusalem. Goldstein is known as a sound and installation artist, whose unique language uses innovative technological means to translate visual image into sound and vice versa.

The curator Louis Grachos has had an extensive career in the field of contemporary and modern art in the United States. He has curated exhibitions for many artists, including Clyfford Still, Sol LeWitt, Chuck Close, and Francis Bacon, and among contemporary artists Monika Sosnowska, Jim Hodges, Ryan Gander, and many others. He served as the director of the Albright-Knox Art Gallery in Buffalo, New York, and SITE Santa Fe, New Mexico. In his current position as the director of The Contemporary Austin he has spearheaded its significant development and expansion.