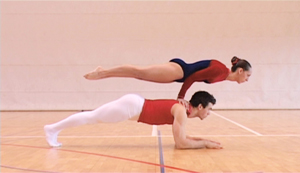 The strength of the gymnasts is manifested in their stillness. Their bodies are balanced and parallel to one another. She leans against him in a soaring position, a moment preceding a launch that will never take place.
At first glance this appears to be a static photograph freezing a movement, yet on further examination one notices the breaths and slight movements. The two of gymnasts support one another in the Adagio position: he is stable, serves as supportive foundation and she is on top, holding, as if floating in the air to no end.