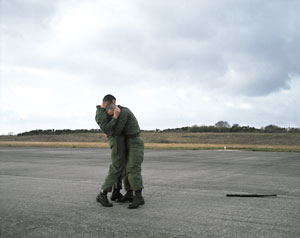 Through the observation of the training exercises performed by combat soldiers and interviews with them, Isabel Rocamora explores one of the most important aspects of war – the psychological state of mind necessary to motivate combatants into action.

The repetition of the physical movements performed in the course of hand-to-hand combat emphasizes the technical skills required when preparing to kill an enemy. The movements must be performed almost automatically, like a series of reflexes, and should involve as little thought as possible. At the same time, the mechanization of the body’s movements must be accompanied by a conscious effort to ignore the enemy’s humanity. As one soldier who fought in Iraq puts it: “If you start thinking on an emotional level about that person, his wife, his girlfriend, his kids, his family, you will fail, and the system won’t work.”

Rocamora’s work, which was filmed on the beach at Néville-sur-Mer, in Normandy, introduces the viewer to this inner logic. As the work evolves, however, the warring movements come to be captured in slow motion, accompanied by sacred choral music – Arvo Pärt’s Canon of Repentance (1997). At this point, a transformation occurs in the hand-to-hand combat: it becomes more personal and humane, and some of the movements remind us of sacred iconographic images such as the Pietà. The act of killing becomes highly intimate and personal, while the line between feelings of hate and love is suddenly burred.

As the soldiers leave the scene at the end of the film, the last personal observation on killing made by one of the combatants continues to resonate in the viewer’s mind: “It takes years to clear your mind, and I don’t think you ever get rid of it. It never goes away. Never.”