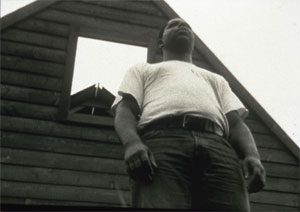 Upon entering the space of Deadpan, a video installation by British artist Steve McQueen (winner of Turner Prize), the viewer is engulfed by the projected scene, assuming the place of the artist, a scene which is duplicated by the reflective floor. Based on Buster Keaton’s physical comedy, the artist reenacts one of the filmmaker’s famous gags: standing in front of a house, which alarmingly collapses behind him, he remains unscathed, as the window of the falling house miraculously fits his body, thus saving him from being crushed.

The work’s title, Deadpan, draws on Keaton’s comic style. Keaton’s white-painted “poker face” (as he was nicknamed) echoes in the figure of McQueen, whose frozen face does not surrender any expression or emotion. Like Keaton, McQueen also appears in the film in life-endangering situations, his physical presence generating the meaning. In Keaton’s film Steamboat Bill Jr., the gag is the climax of a comical action sequence following Keaton running about the city which collapses around him in the midst of a raging storm. When he tries to stop at the shadow of a solid-looking house, it collapses on his head, threatening to crush him in a moment which forms a comical peak as well as a cue for resuming his fidgety movement.

McQueen dissociates the gag from its narrative and comical context, transforming it onto a repeated sequence of causeless collapses. Unlike Keaton’s frantic movement, McQueen’s frozen body stands almost as a monumental sculpture. The only visible movement is that of the collapsing house. Time and again we observe the moment of collapse from classical cinematic angles that generate drama and suspense, but do not provide any additional information that may help us understand the reason for the collapse, the circumstances of the man’s presence in front of the house, or the possible function of the enigmatic structure which is revealed to be entirely unfurnished, following the collapse of the façade.

The stasis, which cumulates into a sense of oppression, is reinforced by the viewer’s confrontation with McQueen. Over and over again he grows alert toward the anticipated collapse, reproduced in the exhibition space, sharing with him the physical experience as a type of nightmarish trauma recurring with no way out. Standing with his feet planted motionless on the ground, the artist is miraculously saved from yet another catastrophic collapse, but is forced to remain frozen in place, since each movement from the exact spot may lead to his death. Keaton’s comical gag transforms in McQueen’s work into a nerve-racking moment, relived over and over again, offering a powerful comment on the human condition, which acquires additional meanings and strata in the context of the current reality in Israel.